About Current number Archive For authors Editorial Board Contacts
Main / Articles / Realization of a cascade treatment algorithm for glaucoma in St. Petersburg

Realization of a cascade treatment algorithm for glaucoma in St. Petersburg


* Impact factor according to the SCIENCE INDEX 2020

Aim: to analyze the duration and regimen of topical treatment and the pattern of prior laser and surgical procedures in patients with glaucoma who were admitted to the hospital for IOP-lowering interventions.

Patients and Methods: this study included 500 consecutively enrolled patients who underwent surgery for uncontrolled glaucoma in 2016–2020 and were followed up for 6–24 months. Disease history, cumulative "preservative" load, clinical examinations, and surgical outcomes were assessed.

Results: preoperatively, most patients received the maximum medical therapy (i.e., three agents in two bottles). Simultaneous use of all four major classes of IOP-lowering medications occurred in 10% of patients only. Two-third of patients required surgical interventions to reduce IOP after a 6-year medical therapy. By the time of admission, 60% of patients were diagnosed with advanced or end-stage glaucoma. Prior laser or surgical procedures to reduce IOP were performed only in 142 patients and 52 patients, respectively. Treatment adherence was lower in men compared to women, irrespective of its stage.

Conclusion: most patients received adequate medical therapy. However, in general, surgery was performed too late. It gives the impression that the efficacy of therapeutic and laser stages of cascade glaucoma treatment is no more than five years. In addition to the obvious drawbacks of a laissez-faire strategy (irreversible vision loss), the risk of surgical failure significantly increases. Long-term (at least 3-year) therapy using (non)fixed-dose combinations of agents containing preservatives is the major modifiable risk factor for early filtration loss. Preservative-free prostaglandin analogues improve treatment tolerability, adherence to treatment, and chances for success of IOP-lowering surgery. The authors’ results demonstrate that gender differences should be considered when planning treatment and follow-up visits.

Preserving vision in glaucoma is so far achieved via reducing intraocular pressure (IOP). Therefore, the European Glaucoma Society strongly advocates for a cascade treatment that implies consecutive use of pharmacotherapy, laser, and surgical procedures to reduce IOP [1]. Meanwhile, ophthalmological care is provided by primary outpatient departments, glaucoma offices, laser centers, private outpatient clinics, and city, state, and private ophthalmological hospitals in today's environment. In this context, a cascade approach is not easy to implement. Therefore, it is interesting to assess whether a cascade treatment approach to glaucoma is feasible in the megapolis.

Our study aimed to evaluate how a cascade treatment algorithm for glaucoma is realized in St. Petersburg given the duration and regimen of topical treatment and the pattern of prior laser and surgical procedures in patients who were admitted to the hospital for IOP-lowering interventions. 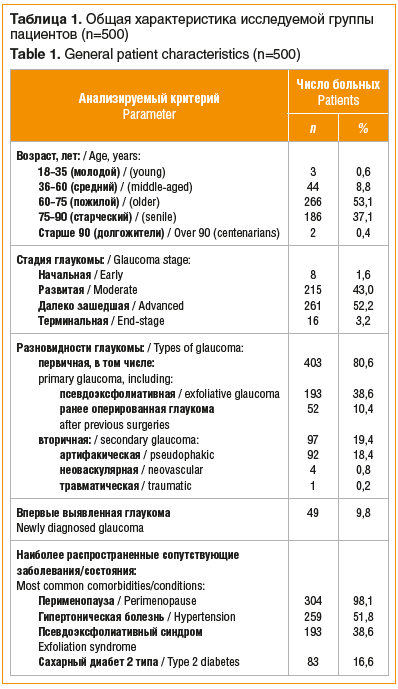 All participants signed an informed consent form for examinations and surgery.

Inclusion criteria were age over 18 years and uncontrolled primary or secondary glaucoma (including glaucoma after prior surgeries) of any stage requiring surgical interventions.

Exclusion criteria were some variants of secondary glaucoma, e.g., after keratoplasty (due to months of pharmacotherapy which significantly affects study outcomes) or lens-induced glaucoma (which required phacotrabeculectomy), poor health, and/or poor adherence to treatment.

The choice of surgical option is customized depending on clinical presentations:

– trabeculectomy was performed in patients with any stage of primary open-angle glaucoma (POAG) uncontrolled by medications or laser surgery or elderly (60-74 years) and senile (over 75 years) patients with secondary pseudophakic glaucoma;

– EX-PRESS® Glaucoma Filtration Device was implanted in patients with any stage of POAG uncontrolled by medications or laser surgery or young and middle-aged (less than 60 years) patients with secondary pseudophakic glaucoma;

– Ahmed glaucoma valve was implanted in patients with any stage of POAG uncontrolled by prior surgical interventions and medical therapy or any variants of secondary glaucoma irrespective of the patient's age.

Postoperative follow-up was 6 to 24 months. All participants underwent daily examinations throughout the hospital stay, after two weeks, 1, 3, 6, 12 months, and every six months.

Patients who fell under the category of "complete failure" as demonstrated by the results of a regular checkpoint examination were excluded from the follow-up as individuals with a definite outcome [7] and considered as complications or failure [12].

A period less than six months during which surgical outcome was classified as "complete success" was regarded as "inadequate follow-up" [7–10, 13].

The study group included 191 men and 309 women aged 36-92 (on average, 71±7.1 years). The clinical and demographic characteristics of patients are listed in Table 1.

The primary systemic comorbidities were hypertension and type 2 diabetes.

One in ten patients irrespective of gender (25 men and 24 women) was newly diagnosed with POAG. However, visual functions, IOP level, and/or poor compliance prevented from conventional cascade algorithm and forced to immediate glaucoma surgery.

The remaining 451 patients (90.2%) were followed by a local ophthalmologist for four months to 58 years (on average, 70.0±4.5 months), mainly for moderate and advanced POAG.

Primary and secondary pseudophakic glaucoma was the most common variant. 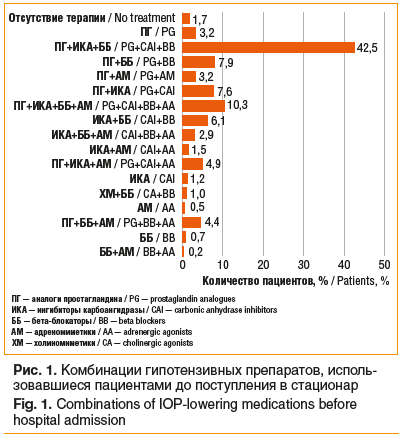 Almost half of the patients (224 out of 500) were scheduled for surgical intervention within the first three years of diagnosis, while 106 procedures occurred within the fourth to sixth years after starting treatment. Two hundred sixty-seven patients (more than 60% of participants) were diagnosed with advanced or end-stage glaucoma at admission.

Retrospective analysis of risk factors for complete failure (20 patients, 0.5%) has demonstrated that gender-independent predictors of early filtration loss are prior glaucoma and cataract surgeries (5 and 8 patients, respectively) and the highest among participants pharmacological and preservative load (6.83±3.39 years of instillations, 3.7±0.97 instillations per day, cumulative BAC dose 7352.3±4172.05 µg).

16 out of 20 patients with complete failure were diagnosed with advanced or end-stage glaucoma at admission despite maximum tolerated treatment. Moreover, surgical interventions to reduce IOP were attempted in 5 patients only.

Table 2 illustrates the relationship between surgical outcome and prior treatment (in particular, preservative load on the ocular surface) in these patients. 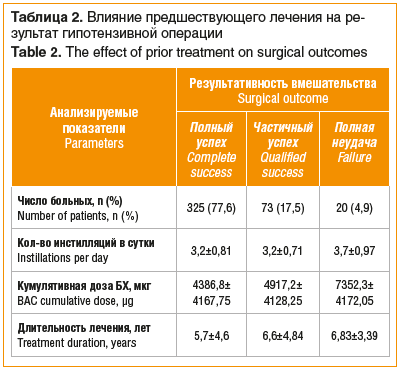 A large sample determines the representativity of this study. Furthermore, the compliance of this criterion with international standards is clearly demonstrated by the fact that the TFOS DEWS Report on dry eye prevalence included only the results of clinical studies which enrolled 500 patients or more [14].

The occurrence of hypertension and diabetes among participants (51.8% and 16.6%, respectively) was significantly higher than in the general population [15–20] (30-47% and 3%, respectively) [21, 22] and almost in line with published data (47.5-48.8% and 15.9-29.4%, respectively) [23–25]. As a result, systemic pharmacological load in participants was significantly higher compared to age-matched individuals without glaucoma. Earlier, R. Dana et al. reported on this tendency (2019) [19]. In addition, numerous medications, including ACE inhibitors, diuretics, beta-blockers, are known to compromise the ocular surface [17, 18] and negatively affect the outcomes of conjunctival flap glaucoma surgery, which implies the generation and long-term maintenance of subconjunctival reservoir.

The analysis of this group revealed several essential factors.

Higher IOP levels, the prevalence of advanced glaucoma, and the proportion of early withdrawal in the male population demonstrate less adherence to treatment. These data are undoubtedly interest from a practical viewpoint since few studies address compliance dependence on gender [26, 27].

Half of the patients received the maximum tolerated therapy, i.e., three medications in 2 bottles, as recommended by domestic and inter guidelines [1]. Simultaneous use of all four major classes of IOP-lowering medications (prostaglandins, beta-blockers, CAI, and adrenergic drugs) bordering on polypharmacy and demonstrating no advantages over triple treatment was reported in 10% only. Therefore, most participants received generally adequate medical therapy.

Preservative-free agents' under-representation on the Russian pharmaceutical market, need for periodic replacement or enhancement with BAC-containing medications prevented recruiting a subgroup of patients without any preservative load on the ocular surface. Furthermore, frequent and sometimes unreasonable switching of IOP-lowering therapy did not allow for sampling patients who received only one type of preservatives (BAC, polyquaternium, oxychloro complex) or patients who received brand name or generic drugs.

In contrast to the intensity of therapy, its duration cannot be regarded as optimal. At admission, two-third of participants were diagnosed with advanced or end-stage glaucoma. Meanwhile, surgical interventions to reduce IOP were performed only in every fifth patient (n=52). In 500 patients, only 142 laser procedures were performed, illustrating the untapped potential of the energetic step of glaucoma treatment. All of that demonstrate that surgical interventions performed only after 5-6 years of conservative therapy are belated.

When analyzing the outcomes of our glaucoma surgical procedures, data on the association between the effect of surgery and the pattern of previous treatment are of particular interest.

The critical factor of qualified success was the extension of topical therapy (3.2±0.71 instillations per day, cumulative dose of BAC 4917.2±4128.25 µg) to 6.6±4.84 years. This measure delayed IOP-lowering intervention by one year but deprived patients of chances for complete success, determining the inevitable return to topical medications in the not-to-late postoperative period.

Our findings align with the results of single studies on establishing approximate terms of the development of adverse reactions of IOP-lowering therapy and, therefore, its optimal duration. Subclinical inflammation of the conjunctiva and subconjunctival tissues is known to develop after three years of instillations of any IOP-lowering eyedrops with preservatives [28]. Meanwhile, a further three-year extension of therapy results in an explosive worsening of dry eye symptom severity, as demonstrated by the OSDI score [29].

It was demonstrated that the reduced efficacy of starting treatment forced to enhance it with another (third or fourth) IOP-lowering medication. When an increased number of instillations (and increased preservative load) immediately worsen treatment tolerability, both a doctor and patient are forced to switch to surgery. Relative resistance of the ocular surface to increased pharmacological exposure allowed for extending the "preservative" stage of treatment up to 6-7 years, however, at the expense of surgical success.

Notably, the duration of treatment preceding glaucoma surgery failure (6.83±3.39 years) is almost similar to the duration of treatment preceding "qualified success" of glaucoma surgery (6.6±4.84 years). Therefore, nearly doubled preservative load (from 4917.2±4128.25 µg to 7352.3±4172.05 µg) is accounted for by unreasonably aggressive topical treatment. Prescription of the fourth medication (that is useless, as mentioned above) is an illustrative example.

Unsurprisingly, the primary cause of surgical failure (19 out of 20 cases) was filtration loss resulting from the preparedness of the ocular surface to excessive inflammatory reaction and scarring and obliteration of new routes of aqueous outflow, as a consequence, short-term efficacy of a surgical intervention.

Analysis of the efficacy of cascade algorithm to reduce IOP in a sample of 500 patients enrolled using a continuous method (with hospital admission for glaucoma surgery) provided several conclusions. Two-third of these patients required surgical interventions to reduce IOP after 6-year conservative treatment. Moreover, in general, surgery was belated. It gives the impression that the efficacy of therapeutic and laser stages of cascade glaucoma treatment (at least, in given social-economic conditions of St. Petersburg) is no more than five years. In addition to the obvious drawbacks of a laissez-faire strategy (irreversible vision loss), the risk of surgical failure significantly increases. Therefore, timely IOP-lowering surgical procedures are reasonable. Long-term (at least 3-year) therapy using (non)fixed-dose combinations of agents with preservatives is the major modifiable risk factor for early filtration loss.  Preservative-free medications improve treatment tolerability, adherence to treatment, and chances for success of IOP-lowering surgery. Finally, the authors' results demonstrate that gender differences should be considered when planning treatment and follow-up visits.

Financial Disclosure: no authors have a financial or property interest in any material or method mentioned. There is no conflict of interests. Received 30.07.2021.

This work is licensed under a Creative Commons «Attribution» 4.0 License.
Previous article
Next article

Additive effect of brimonidine in maximu...
0
395
All articles