Ophthalmological monitoring in patients with hypertension and coronary heart disease


* Impact factor according to the SCIENCE INDEX 2020

Essential hypertension (EH) and coronary heart disease (CHD) are the leading causes of death worldwide [1, 2]. The major complication of hypertension is microvascular damage resulting from impaired vasomotor tonus and increased vascular resistance due to high blood pressure (BP) [3]. The key triggers of CHD are atherosclerosis, vascular spasm, and progressive chronic inflammation associated with thickening or stenosis of vascular wall. Previously, numerous studies on the association between EH and retinal circulation were conducted. Hypertensive ocular funduscopic abnormalities include classic signs of hypertensive retinopathy, e.g., arteriovenous crossings, generalized or focal narrowing of arterioles, microaneurisms, intraretinal hemorrhages, cotton-wool spots, and optic disc edema. These abnormalities increase the risk of systemic disorders, i.e., stroke and cardiovascular diseases [6, 7]. Larger retinal vessels (200–300 μm) were also evaluated on color fundus images. The correlation between the diameter of arterioles and EH stage was established [3]. Risk factors of CHD are described in detail and well-known. However, methods and markers to stratify patients by the risk of CHD are still of interest.

There are two sources of retinal blood supply, i.e., retinal vessels and choriocapillaris. Retinal blood vessels supply five inner retinal layers. Five outer retinal layers are almost avascular and receive oxygen and nutrients from choriocapillaris. Both retinal and choroidal blood vessels are supplied from the ophthalmic artery (a terminal branch of the coronary artery). Since retinal vessels are about the same size as the coronary microcirculation (~100–250 μm), they may be representative of the processes occurring in subclinical coronary stenosis [8].

Retinal vascular abnormalities are detected by fundus biomicroscopy, fundus photography, and fluorescein angiography (FA). Despite the invasiveness of FA (IV injection of a contrast agent) and side effects of fluorescein, FA is considered the gold standard for vascular imaging for more than 50 years [9]. Recently, optical coherence tomography angiography (OCTA), a novel noninvasive technique of fundus vascular imaging, was introduced into clinical practice. OCTA is a useful tool for the early diagnosis of many ocular disorders, i.e., age-related macular degeneration (AMD) [10], diabetic retinopathy (DR) [9], and hypertensive retinopathy [11].

Prior studies have demonstrated the association between retinal microvascular abnormalities and CHD. Thus, Tabatabaee et al. (2013) revealed a strong correlation between atherosclerosis of retinal arteries and CHD severity [12]. Wong et al. revealed correlations between narrowing of retinal arterioles and CHD development by measuring the diameter of individual arterioles and venules on fundus photos [13]. However, we failed to find any studies on the association between EH, CHD, and retinal/choroidal vascular abnormalities using OCTA.

To study ophthalmological clinical functional parameters in patients with EH and CHD and coronary artery stenosis.

Sixty patients (118 eyes) were examined. Group A included 30 patients (58 eyes) with EH (stage 1, 2, or 3) and CHD (stable angina). Group B included 30 healthy controls (60 eyes) without EH or CHD. The mean age was 64.7 ± 0.95 years. Group A patients regularly seen a cardiologist and received medical therapy (according to the guidelines of the Russian Society of Cardiology). CHD and coronary artery stenosis were verified by coronary angiography. The duration of EH and CHD was less than 5 years in 15 patients (50%), 6 to 10 years in 10 patients (33.3%), 11 to 15 years in 3 patients (10%), and more than 15 years in 2 patients (6.6%). During the follow-up, BP was stabilized (135/85 mm Hg) in 30 group A patients. Eye fundus abnormalities were classified using the M.L. Krasnov grading system for hypertensive retinopathy (1948) that includes four stages, i.e., hypertensive angiopathy, hypertensive angiosclerosis, hypertensive retinopathy, and hypertensive neuroretinopathy.

Ophthalmological exclusion criteria in group A and B were inflammatory ocular diseases, glaucoma, moderate to high refractive errors, (im)mature cataract, and significant opacities of the optical media that potentially affecting OCTA imaging. 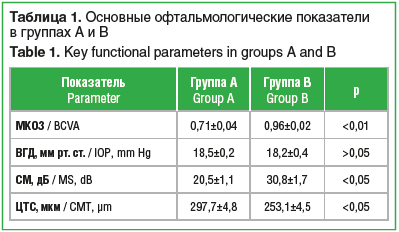 Fig. 2 illustrates the data of a 65-year-old man who was diagnosed with EH stage 3, high (stage 4) risk of cardiovascular complications, CHD (stable angina, NYHA class II), and hypertensive angiopathy. The BCVA of the right eye was 20/25. MAIA microperimetry revealed a reduction in MS to 12.6 dB without any significant abnormalities on fundus photos and horizontal OCT scans. 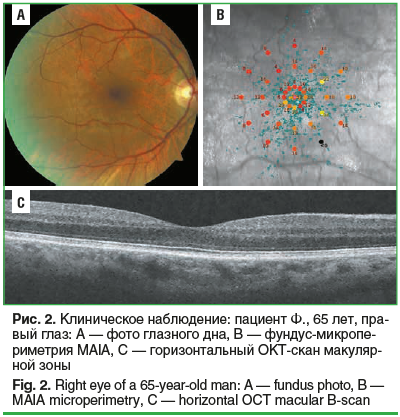 Vessel density measured by OCTA is the strongest indicator of the impairment of fundus microcirculation (see Fig. 3).

Fig. 4A illustrates coronarography of a 66-year-old man diagnosed with EH and CHD that revealed the stenosis of the anterior descending artery (>70%). OCTA (see Fig. 4B) identified reduced retinal SCP VD in most investigated areas, i.e., by 17% in the fovea, 43% in the nasal sector, 44% in the inferior sector, and 45% in the temporal sector. Fig. 4C illustrates SCP VD map of a healthy individual without EH or CHD (VD in the fovea is 31% and VD in parafovea is 54–58%). 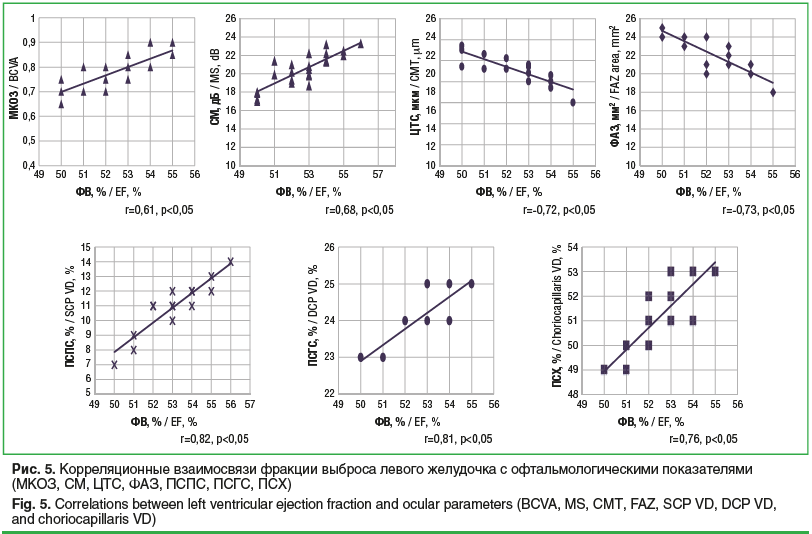 Currently, scientists worldwide extensively study the associations between retinal vessel density and CHD. The severity of retinal artery atherosclerosis correlates with the severity of CHD. The association between the narrowing of retinal arterioles and the development of EH and CHD was also established. Meanwhile, the diameter of retinal vessels, in particular, arterioles, allows for predicting the risk of EH and CHD. However, all these studies were conducted in patients with EH and CHD with clinically apparent vascular abnormalities of eye fundus [8].

In addition to ophthalmoscopic abnormalities, we evaluated MS, SCP VD, DCP VD, and CC VD in patients with EH and CHD and coronary artery stenosis, even in the lack of clinically apparent fundus abnormalities. Abnormalities diagnosed by OCTA with the assessment of vessel density may be representative of the severity of cardiovascular disorders. Thus, noninvasive OCTA is characterized by a higher resolution compared to classic FA and indocyanine green angiography (ICG) [22]. OCTA allows precise localization of pathological process in both retinal and choroidal microcirculation. Meanwhile, FA is used for observing retinal vessels and ICG is more suitable for visualizing choroid [23]. Coronary angiography is the gold standard to diagnose cardiovascular diseases [24].

We have demonstrated a significant reduction in vessel density in most retinal sectors in group A compared to group b (p < 0.05). Additionally, a significant decrease in BCVA was revealed in group A. MAIA microperimetry detected a reduction in retinal sensitivity before morphological abnormalities identified by OCT occurred. CMT was significantly higher in patients with EH and CHD with coronary artery stenosis compared to healthy individuals.

Contact information: Ana Dgebuadze, e-mail: dgebuadzeana@yahoo.com. Financial Disclosure: no authors have a financial or property interest in any material or method mentioned. There is no conflict of interests. Received 15.03.2021.

Read the article in PDF in Russian

This work is licensed under a Creative Commons «Attribution» 4.0 License.
Previous article
Next article 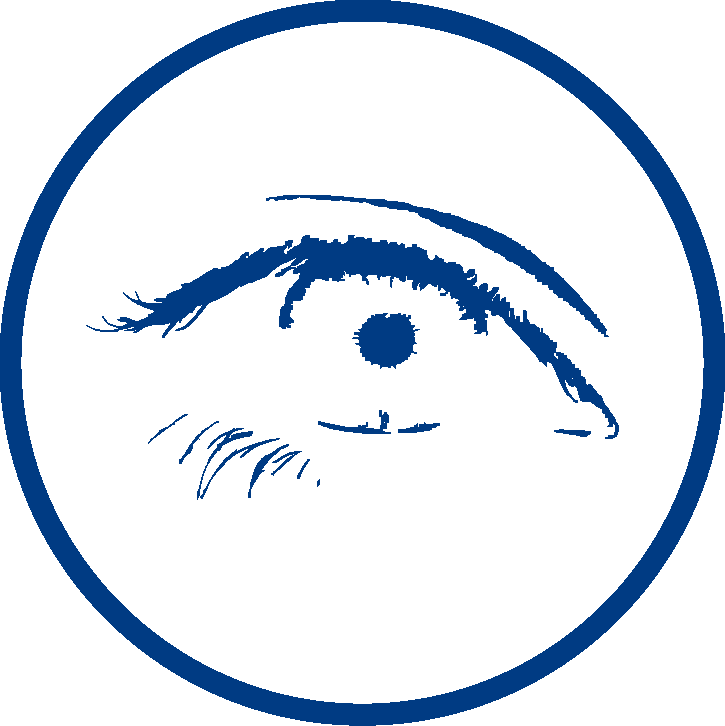 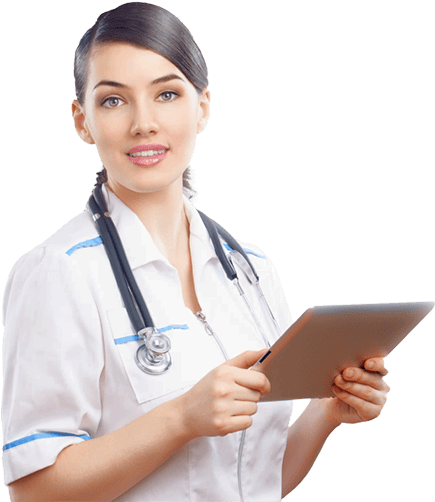